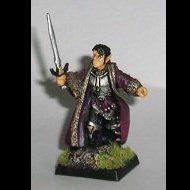 EDIT - This is now going to be somewhere I dump all my Reaper projects while (hopefully) not causing chaos by misusing the Show Off section. I'll pop finished miniatures that are individually worth lo

More from the same project - Reaper Bat Swarms (with a couple of modifications, because I can't use exactly the same model twice)     and something a bit different - I added this S

Of course, the one thing that works just like every other miniatures forum and I miss it! Thanks    Digging through my photobucket, here are some assorted Reaper Undead for you to gawp at...