dark dwarves, were they evetually going to be a faction? 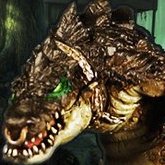